Most sources trace the first city manager to Staunton, Virginia in 1908. Some of the other cities that were among the first to employ a manager were Sumter, South Carolina (1912) and Dayton, Ohio (1914); Dayton was featured in the national media, and became a national standard. The first "City Manager's Association" meeting of eight city managers was in December 1914.  The city manager, operating under the council-manager government form, was created in part to remove city government from the power of the political parties, and place management of the city into the hands of an outside expert who was usually a business manager or engineer, with the expectation that the city manager would remain neutral to city politics. By 1930 200 American cities used a city manager form of government.

As the top appointed official in the city, the city manager is typically responsible for most if not all of the day-to-day administrative operations of the municipality, in addition to other expectations.

Some of the basic roles, responsibilities, and powers of a city manager include:

The responsibilities may vary depending upon charter provisions and other local or state laws, rules, and regulations. In addition, many states, such as the states of New Hampshire and Missouri, have codified in law the minimum functions a local "manager" must perform. The City Manager position focuses on efficiency and providing a certain level of service for the lowest possible cost.  The competence of a city manager can be assessed using composite indicators. 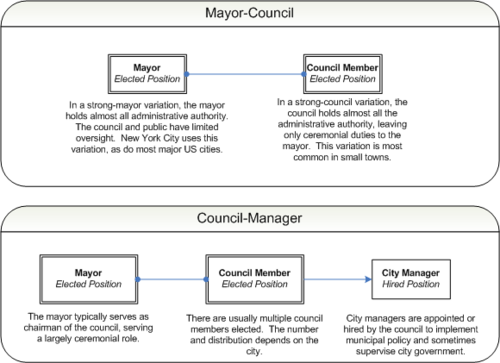